From Traditional to Exotic, see our available wood species.

Select The Right Wood Species For Your Gravley Door

We use the finest wood stock available. Each piece of our stock is hand selected to coordinate color and grain. Rustic style doors, made with knotty alder or knotty pine show variations like mineral streaks, sapwood, heartwood, and some knots. Knots will be structurally sound, but could have slight voids or cracks around them. 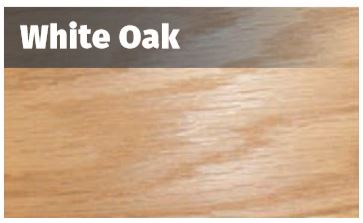 White oak is a hard and heavy wood with medium bending and crushing strengths, and outstanding wear resistance. The sapwood is light brown in color. The heartwood is variable in color and ranges from light tan to dark brown. The wood may also have a pinkish tinge. Variations in color and grain can be considerable, but not as pronounced as in red oak. The grain is open with rays that are no longer than those in red oak. The wood can be stained with a wide range of finish tones. 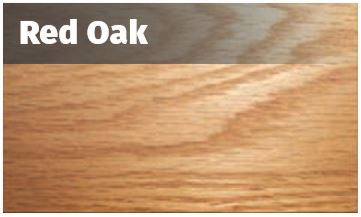 Red oak is hard and heavy, with medium bending and high crushing strengths. The sapwood of red oak is white to light brown and the heartwood is a pinkish reddish brown. The wood is similar in appearance to white oak, but with a slightly less pronounced figure due to smaller rays. The wood is mostly straight grained with coarse texture. Red oak can be stained with a wide range of finish tones. The large pores tend to produce strong contrast in staining.

Knotty alder is a relative soft hardwood of medium density that has low bending and crushing strengths. The heartwood is indistinct from the sapwood and is light reddish-brown. Knotty alder has been described as pleasing in appearance, with grain that is straight and subdued. The wood texture is typically fine, even and close. The wood has above average dimensional stability after seasoning. The uniform, small pore structure and color consistency of knotty alder allows it to stain easily.

Cherry wood is a medium density wood with good bending properties, it has low stiffness and medium strength and shock resistance. The narrow sapwood is whitish to reddish brown in color, sometimes described as creamy pink. The heartwood varies in color from reddish brown to deep red. Color variations between boards can be significant. The grain is fine, but contains dark wavy streaks which has a strong resemblance to true mahogany. The wood takes stains and all types of finishes well. Cherry is handsome and rich in luster.

African mahogany is a high-density wood with medium bending and crushing strengths. The sapwood is not always distinct from the heartwood and color changes from light pinkish-brown when freshly cut to a dark reddish shade, usually with a purplish cast upon exposure. The grain is typically interlocked which produces a striped or wavy figure. Swirl and crotch figures are also reported to be common. Texture is moderately coarse but sometimes varies. Staining properties are rated as good and luster has been described as high. 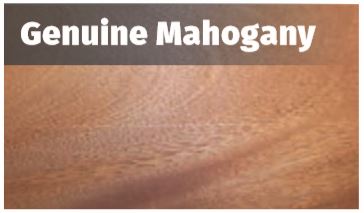 Genuine mahogany is a high-density wood with good strength-to-weight ratio and relative high bending and crushing strengths. Genuine mahogany varies considerably in color. It may be yellowish, reddish, pinkish, or salmon colored when freshly cut, maturing into a deep rich red or brown color with age. Exposure to strong sunlight may cause some fading. The grain is straight to wavy or curly. Irregularities in the grain often produce highly attractive figures. The texture is fine to medium and uniform. The wood is described as highly lustrous. 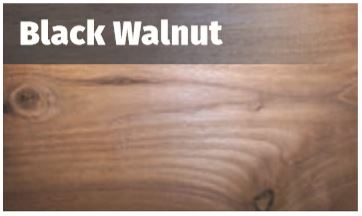 Black walnut is a tough hardwood of medium density, with moderate bending and crushing strengths and low stiffness. The sap wood is whitish to yellowish brown. The color of the heartwood varies from light grayish brown to deep chocolate brown to almost black purplish brown. The appearance of the wood is usually described as warm and inviting. The grain is slightly open and usually straight, but may be wavy or irregular. Texture is coarse, but uniform. Wood surfaces are generally dull, but the wood develops a lustrous patina after many years of use. 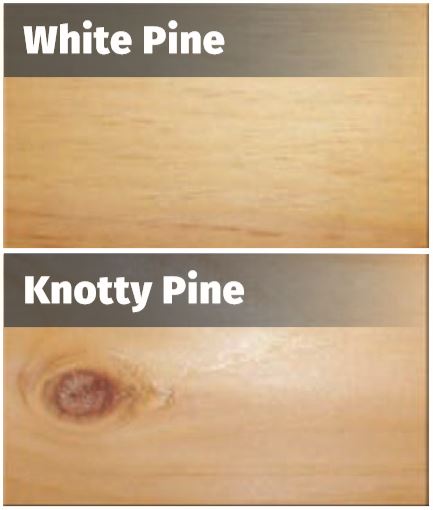 Pine is a soft wood with medium bending and crushing strengths. Surfaces may dent or scratch easily. Weight is about average. Pine is stable after seasoning, and exhibits only small dimensional changes in response to climate fluctuations in its immediate surroundings. The sapwood is whitish to pale yellow and is reported to be very thick in mature trees. The heartwood is deep yellow to reddish brown, yellowish to light reddish or orange brown. The grain is typically straight and even. It is also characterized by fine, dark lines of resin ducts and numerous knots that are generally sound. Texture is described as medium and uniform. To prevent bleeding of finishes, especially around knots, pretreatment of wood surfaces with a sealer before painting is recommended. Pine takes a variety of finishes, but usually requires some surface preparation. 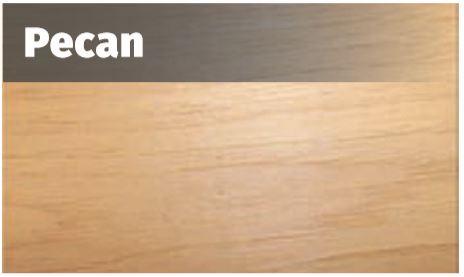 Pecan is hard and heavy wood with maximum bending and crushing strength. It is harder than teak and does not mar or dent easily. The sapwood is white to pale brown in color. The heartwood is rich reddish brown in color and may contain streaks of slightly darker hue. The grain is typically straight, but may occasionally be irregular or wavy. The wood has coarse texture. Pecan responds to polishing to yield a smooth finish. The wood takes stains well.

Cypress is a moderately heavy wood with medium bending strength and moderate crushing strength. It is hard, strong and moderately stiff. The sapwood is pale yellowish white and it merges gradually into the heartwood. The heartwood is varied in color with some wood featuring lighter streaks on a darker background. The color ranges from yellowish to light or dark brown almost black. The grain is straight but may be uneven. Texture is coarse and oil from the tree imparts a greasy feel to the wood. Cypress takes paint extremely well. 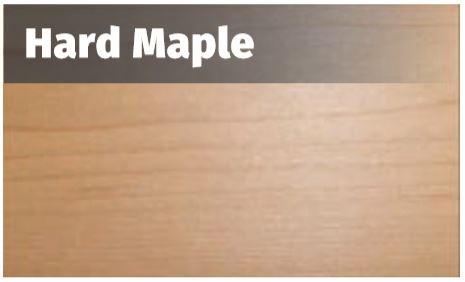 Hard maple is a heavy wood, very high in bending strength and is much stronger than teak. Compression strength is high and hardness is medium. It resists denting and marring. Hard maple is approximately 25% harder than soft maple. The sapwood is white in color and the heartwood is uniformly pale reddish brown. Its grain is typically straight but can also be curly or wavy. The wood is close-grained and subdued, sometimes with decorative figuring. Hard maple has a very fine and even texture. It stains satisfactorily but unevenly and takes paint well. 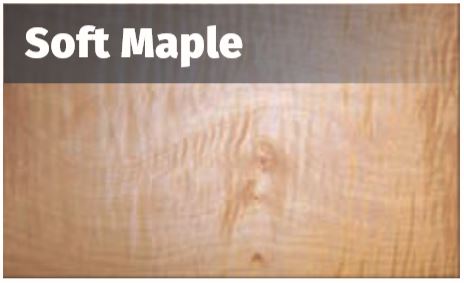 Soft maple exhibits high bending and maximum crushing strengths with density well below that of hard maple. The bird’s eye figure found in hard maple is rather rare in soft maple, but the wood may exhibit markings. The sapwood is wide and white in color. The heartwood is light brown and may show grayish or greenish tinge or a faint purplish hue. The grain of soft maple is straight but can exhibit curly or wavy lines. The wood is close-grained and fine textured. It takes paint and enamel extremely well. 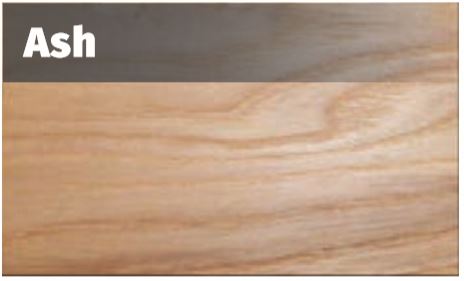 Ash is a moderately heavy hardwood with many of the same specs as red oak. It has excellent shock resistance and very good overall strength and dimensional stability. The sapwood is narrow and white in color. The heartwood is pale brown or pale yellow streaked with brown. The grain is bold, straight and moderately open with an occasional wavy pattern. Ash is coarsely textured and can be polished to a high luster. The wood has good straining characteristics and is often finished in black painting properties are satisfactory.